While at a conference in London‚ CED’s Michael Heap and Giles Heap were approached by a contract manager from Ipswich Council. They had a scheme that they needed to roll out very quickly‚ but had no idea how to do it.

The scheme was “Giles’ Circus‚ Ipswich”. This congregation of streets was named after the famous cartoonist from the Express Group of Newspapers‚ as his office window overlooked the circus. There was a statue of one of his most famous characters “Grandma” placed there to commemorate this amazing satirical artist.

The council needed to redesign the area and wanted to make it as up to date as possible. It had to take numerous buses and high levels of pedestrians‚ yet it had to be welcoming to the many shoppers‚ visitors and locals visiting the area.

Michael and Giles came up with the idea of using a grey pink granite in the road‚ in order to give the area a warm‚ friendly feel and then to use two high quality yorkstones mixed together for the paving. Furthermore a blue grey granite was used to intercept the two materials in order to help the visually impaired understand where the paving finished and the road started.

Grandma was moved from her original place and raised on to a three tiered Granite dais‚ with the various street names inscribed onto it‚ along with a Memorial to Carl Giles. All of this CED designed and supplied too.

The road itself was designed to BS7533:2010 and incorporated 150mm x 300mm x 180mm thick granite setts and Steintec Mortars. It was designed to take in excess of 1000 axles per day‚ which makes it one of the first schemes in the UK to use the‚ then new‚ British Standards.

From initial concept discussion and design‚ through to confirmation of order was about 10 weeks‚ which is unbelievably fast. The whole scheme was opened in September 2010. 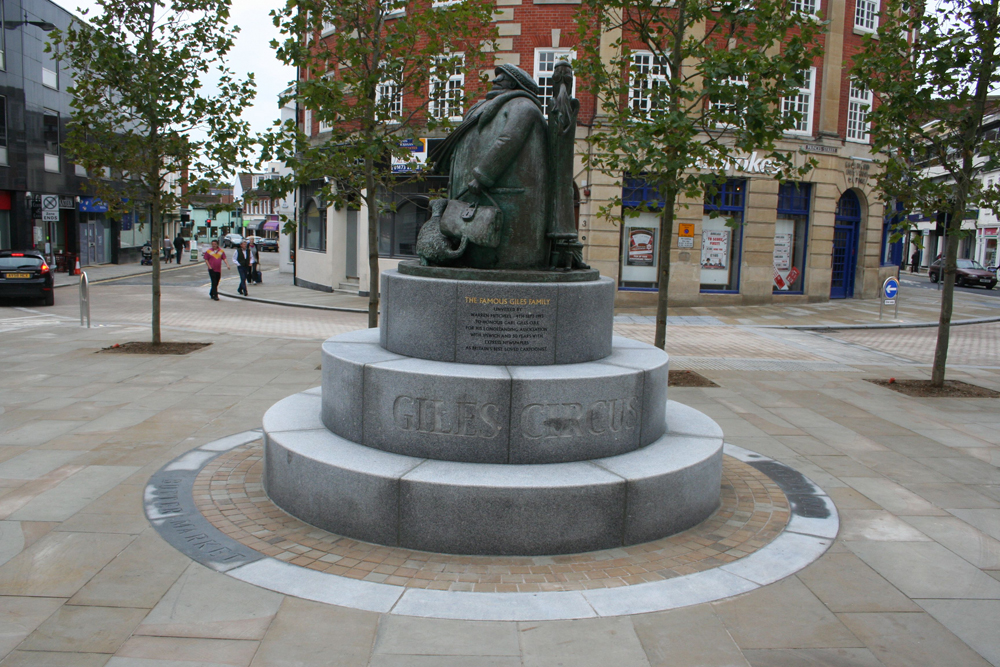