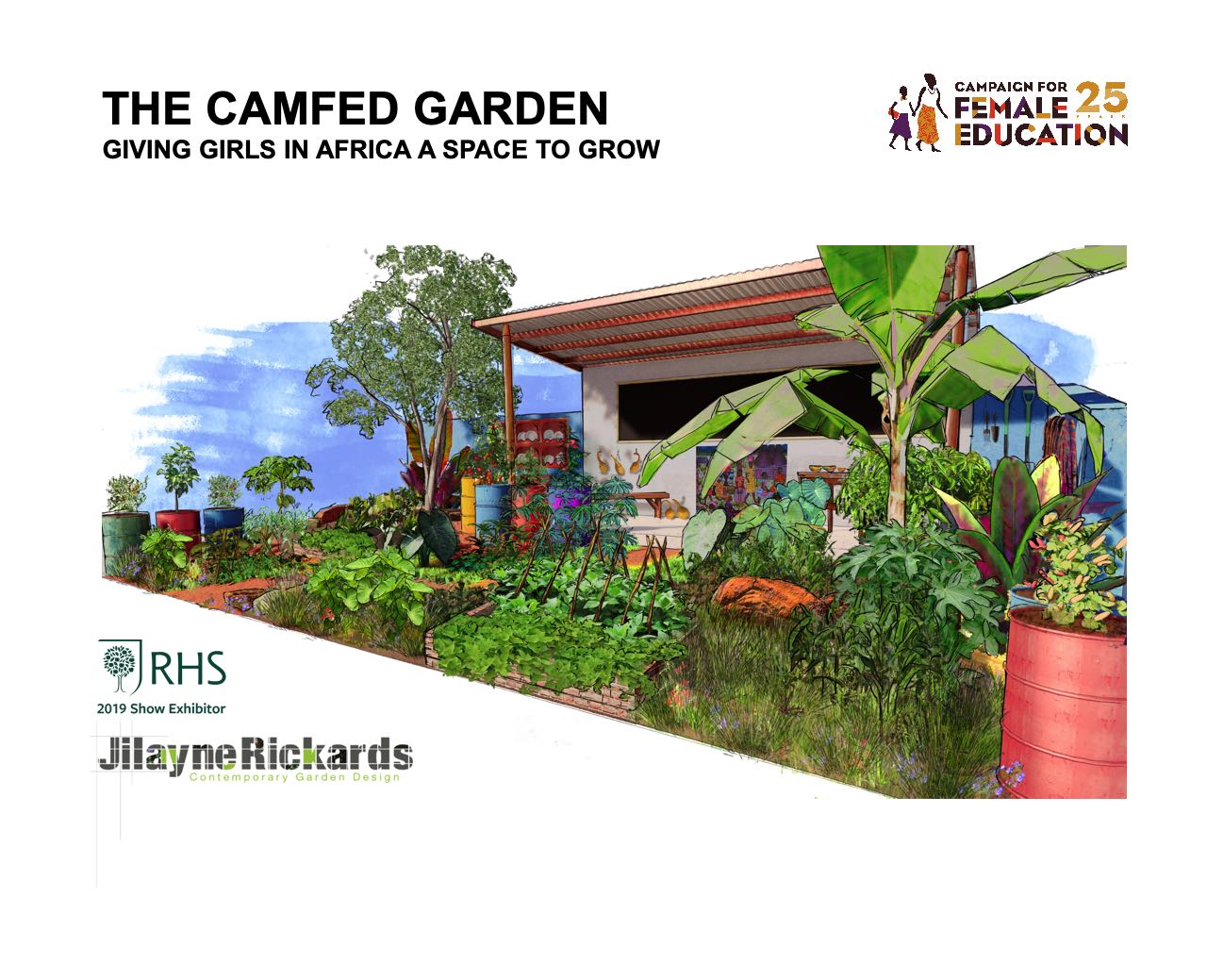 As part of their 25th-anniversary celebrations, CAMFED will be revealing their first ever RHS Chelsea show garden, The CAMFED Garden - ‘Giving Girls in Africa a Space to Grow’. With this garden, they hope to draw attention to the urgent need to empower and educate young women in some of the world’s impoverished communities, and their campaign to grow 1,000 women-led agricultural businesses across Africa. “We are delighted to bring the surroundings of rural Zimbabwe to one of the RHS Chelsea Flower Show’s prestigious show gardens. This innovative garden design illustrates how we support girls in the classroom and beyond, to reach their full potential.” - Lucy Lake, CEO

The garden has been designed by Jilayne Rickards, a first-timer at RHS Chelsea, she travelled to Zimbabwe and met with a CAMFED partner community for research. Her design took inspiration from the people she met there and the places she toured. An example of this is the outdoor classroom in the design, which is based on a school she visited. The hard landscaping in the design reflects the landscapes she experienced on her trip, including the iconic red soil and the incredible Balancing Rocks of Zimbabwe.

These are the elements of the garden in which Jilayne and contractor, Conway Landscapes required support. Cormac Conway, Director of the award-winning garden construction company, is a self-confessed show garden addict. It was he who recommended Jilayne get in touch with CED having worked with us in the past. Jilayne discussed her requirements with MD Giles Heap,, and she and Cormac were invited to visit our Scotland Depot. We hold an extensive stock of boulders and rockery in our six-acre yard at Castlecary.

Jilayne and Cormac made the trip to Scotland at the beginning of the year and were introduced to Depot Manager Mark Kenny and the Castlecary team. Jilayne states, ‘To ensure the authenticity of the Zimbabwean theme that runs through the CAMFED RHS Chelsea garden, I absolutely had to see the rocks before including them – they must be the right colour and size which can’t be done from photos, so a visit to CED Castlecary was essential.’ Most of their day was spent selecting boulders while battling the cold Scottish winds. Jilayne recalls, ‘Once I had decided which to use, we did a quick mock-up on site to check that the sizes would work well together. This will save loads of valuable time when we construct the garden and was great fun too – the absolute designer classic of left a bit, right a bit.’ After much maneuvering by Yard Foreman Pat Hughes in the forklift and by our hiab driver Jim Wilson with the grab, the boulders were eventually positioned in a way that Jilayne and Cormac were happy with.

Satisfied with their chosen boulders they had one more stop before catching their flight home, and Mark Kenny took them to a local site which had some red sandstone stock. Fortunately, the rocks were found to be a perfect size and colour, and around 4 tonnes was selected. Jilayne told us, ‘The stone will be cleaned off to remove moss and reveal their beautiful colours. I am so excited to be using them as a focal structure in the garden that gives a sense of place and directly relates to the Zimbabwean landscape.’

Left in #TeamCastlecary’s capable hands the stones were washed and sent south of the border to our London East Depot to await RHS Chelsea. However, Jilayne and Conway couldn’t resist this one last opportunity to do another ‘rock rehearsal’ and they travelled to West Thurrock Depot and spent a day there positioning the stones all over again.

CED is delighted to be supporting the CAMFED garden and have very much enjoyed working with Jilayne and Cormac. We look forward to seeing the garden in all its colourful glory in just a few weeks time. We wish Jilayne and the team, the very best of luck for RHS Chelsea and we also wish CAMFED great success in their campaign.