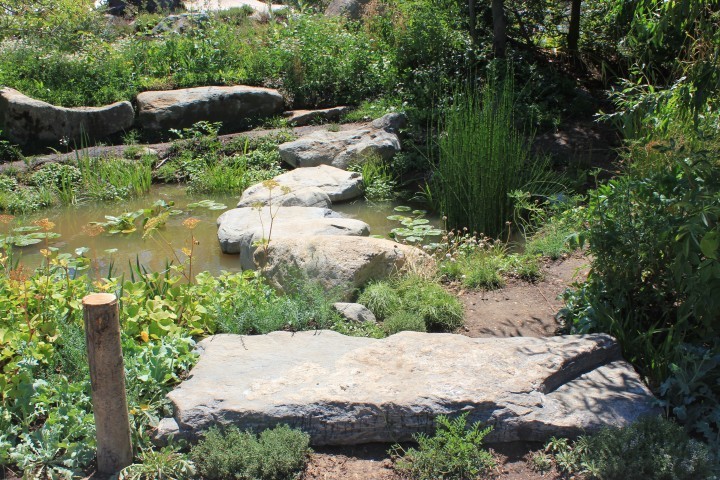 Designed by Ann-Marie Powell and constructed by the team from Sandstone Design, the garden is inspired by the British landscape and the people who live, visit and work in rural areas. The design features a tiered landscape consisting of different sections, each with its own unique character representing a different area of the British landscape, with its individual native stone and planting. The garden reaches across the Isles, from the Scottish Highlands to the Yorkshire Dales and the woodlands in North Wales to the lakes and rivers of the South.

Scottish Highlands: Perfect for creating a rustic and atmospheric style, large Gabbro boulders sourced from Scotland were selected for the Scotland Highlands, giving this elevated and high-up section of the garden a rocky, exposed feel.

Yorkshire Dales: Anyone who’s been to Yorkshire will have seen the very distinctive limestone-covered moors. Ann wanted to re-create the look of expansive landscapes covered in craggy, water-worn rocks. As limestone from Yorkshire is now a protected material, Giles helped Ann to source another waterworn limestone from the British Isles, our grey Weathered Limestone, which has very similar geological properties to that found in Yorkshire.

Welsh Woodlands: Looking to the landscapes of North Wales in particular and drawing inspiration from the stone material used traditionally throughout the country, a beautiful slate was selected. Slate is fantastic for bringing dramatic colours and jagged shapes into a scheme.

Coastlines: A mix of Cobbles and Pebbles were selected to represent the great British coastline, with some flat-shaped boulders to be used for stepping stones.

South of England: Purbeck Limestone was chosen for this area of the garden, a native stone to the South. Purbeck has a light grey and cream shade, and its blocky shape makes it a great material for stacking and building height with. The stone will be built up into a cave which will act as the starting point for the water feature.