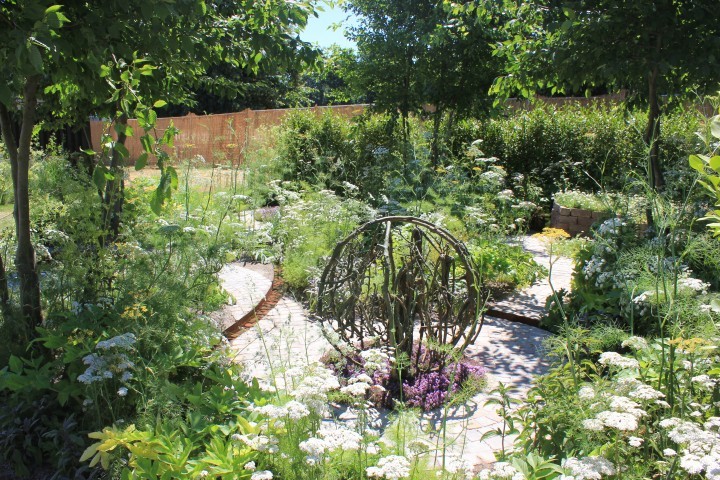 A garden to encourage deep thinking via a continuous path with no start or end point. The visitor moves through the space without a destination – a space which is defined by motion rather than walls. The aim of the garden is to slow one’s pace, mind and encourage a sense of being in the moment. Narrow, tightly curved footpaths circle around different sections of the garden. The paths encourage people to walk through and feel immersed in the garden whilst brushing past the greenery, which would include plants with scented or botanical qualities such as fragrant fennel and mint.

CED Stone Group were delighted to donate our Porphyry Setts, which were used to lay the paths in tight curves. Their darker, rustic purple tones and textures that the stone work particularly well in the design, giving a wonderful aged and reclaimed effect.

The paths curve round a range of different features which sit in the middle of the circles, including a wicker sculpture, a curved bench planted with camomile, a round planting bed filled with thyme and a large, still pool. The still water acts as a mirror, perfectly reflecting the sky above, but small streams of babbling water also run through the garden as a contrast. Our polished pebbles look glassy and attractive under the still pool and help to create babbling ripple sounds as the water runs over them in the moving streams.