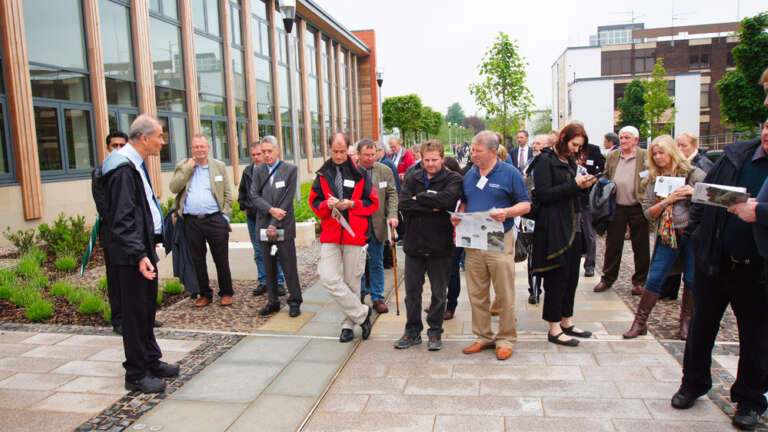 
CED has been working in conjunction with the British Geological Survey for more than 2 years to facilitate the creation of the Geological Walk at the BGS headquarters in Keyworth, Nottingham and Thursday 21st June saw the launch of the completed path.

With over 60 guests in attendance Michael Heap, CED Stone Group’s managing director, and Stephen Parry, the BGS’ mineralogist and petrologist led guided tours through the 130m long path. Stephen took the first tour and spoke from a geological point of view and Michael then picked up that group, repeated the walk and spoke from a CED product point of view. Lunch followed, giving a chance for all guests to network and talk ideas and views of the path. Michael closed the day with a short talk and then led a discussion about the whole project and how to maximise its potential.

The British stone industry has come together in a remarkable way to support this project which shows every type of British paving stone in regular production and a good few that are not, but could be. The path is 1200m2 and includes some 40 different products, with materials representative of every period from the Precambrian to the Quaternary. In addition, the paved entrance is over 500m2.

There cannot be a more appropriate setting for the stone than the Geological Survey, the partly publicly funded body which advises the British government on all aspects of geoscience, as well as providing impartial advice on geological matters to the public, academics and industry. The path is the latest phase of redevelopment works at the BGS HQ. The landscape architects who created this wonderful space are Munro + Whitten of Leicester. It was built by Kier Construction with Tecni:Block as their paving subcontractor.

For financial reasons, the original plans for the design of the main entrance and path together incorporated over 50% of concrete paving but with Michael and CED’s persistence and efforts and the wonderful support of the British stone industry, it became possible to ensure that natural stone was used for the whole project.

The path runs in geological order and displays stone from up to 3,500 million years ago. Each period is bounded by stainless steel divider strips and has nameplates set into the central timeline spine. Stainless steel numbers are also set into the spine, cross-referencing with a leaflet which enables the easy identification of all the different stone types. Please click here to view the path

“The path has turned out as well as I could possibly have hoped when I suggested that natural stone be used throughout. Every supplier I approached contributed to facilitating the creation of this permanent display of British stone paving – a great national resource for the paving and landscape industries.”

The launch day went extremely well and was well received. The specification guides are available to download here and a video will shortly be available online. Please contact the CED Stone Landscape - Midlands depot (01773 769916) for an appointment to view the path.