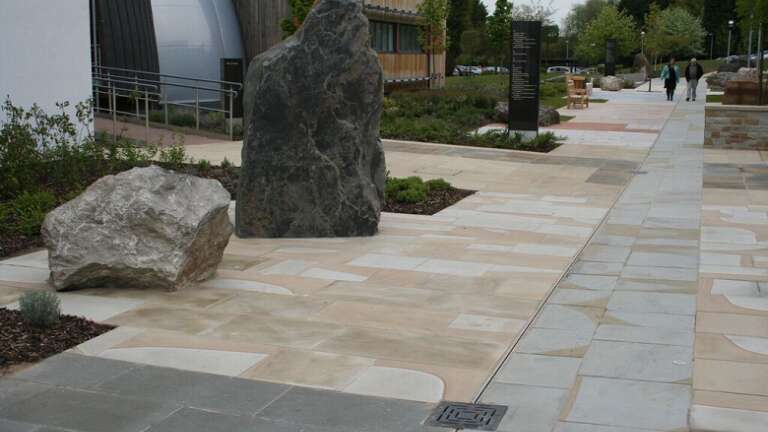 
We all know that the UK currently imports huge amounts of stone from China and India. Interestingly though, for commercial and public realm projects, we are seeing more and more clients choose European stone over Indian or Chinese stone despite the higher associated costs. Why? More often than not this is simply because quality European stone from countries like Spain, Portugal, Italy, Germany and France can be imported with quicker lead times.

Geologically speaking, the variety and sheer scale of production for many stones available from the far east, often make them a more economical choice, and in the last couple of decades huge investment in production and environmental systems have enabled better production and workmanship capabilities than ever before, however the size of the industry is leading to more and more “standard” materials simply being quarried out, with new and supposedly “equivalent” sources being brought online in a matter of months. Combine this with the influence of local politics on the stone industry in China specifically, and it becomes almost impossible to specify stone from China for schemes that are likely to run for any length of time.

Although we are very fortunate to have a very diverse range of building stones in the UK, we have a much smaller range of usable stone materials to choose from for paving, and there are even fewer suitable options available for building commercial or public realm landscapes with traffic. As such, we will never be fully self-sufficient when it comes to supplying natural stone paving for hard landscaping, simply because we do not have enough resources to satisfy our own demand for natural stone. The planning permission process for establishing a new quarry in the UK is exceptionally lengthy, although once given, a British quarry will be less likely to be closed arbitrarily and as such, will usually offer a more reliable, long term supply of stone than many cheaper imported stones, often making British stone a more sure choice for specification in long-term projects that may be expected to run over many years.

Some projects require larger quantities of materials quickly which European stone is perfect for, however this may be problematic in the not-too-distant future. Whatever Brexit “deal” transpires, importing from the EU is likely to become more expensive with longer lead times. Increased customs administration, exchange rates and delays at ports will all contribute to a rise in prices.

Maybe now is the time to look again at the best of British?