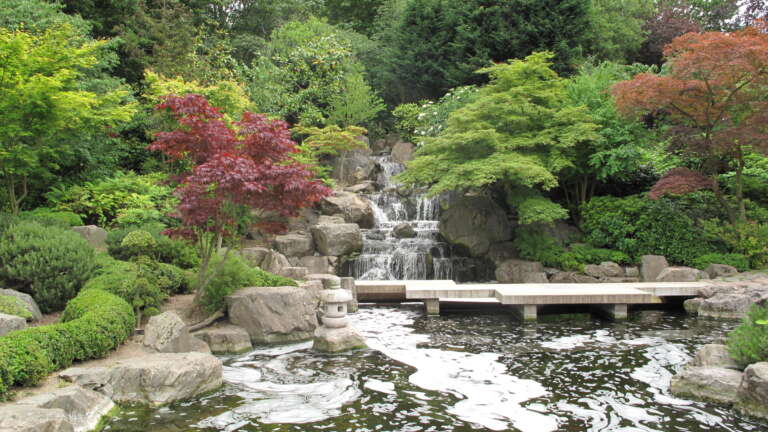 
Nestled in the grounds of the 22-hectare Holland Park in west London, you will find one of Britain's most beautiful and unique gardens. This month marks 30 years since the Kyoto Garden was opened by HRH Prince Charles and His Imperial Highness The Crown Prince of Japan. It was a gift from the city of Kyoto to honour the friendship between Japan and Great Britain, also in recognition of the Japan Festival that was to be held in London the following year, 1992.

The garden, designed by a celebrated Japanese designer, was built by three members of the Kyoto Garden Association with Churchmans as the local landscape architect to provide backup.

This was a cooperative project between the Royal Borough of Kensington and Chelsea and the Kyoto Chamber of Commerce in Japan and when the search for materials to use in the garden began, CED Stone Group were, very kindly, recommended by a quarry in Cumbria.

The Japanese Embassy got in touch with Company Chairman Michael Heap, he tells us,

"At that time, I knew almost nothing about Japanese gardens. Fortunately, my mother had a contact in Japan who kindly sent over a book for me called Kyoto Gardens that had 40 excellent photos of Temple gardens in Kyoto. These were enough to give me a clue as to what to expect."

The team involved in the build were invited to our West Thurrock Depot. There they would be briefed by Michael and taken a tour of the yard to view the materials in stock. The team that visited, including embassy staff, a translator and three non-English speaking heads of traditional design companies.

"I remember well the first visit. We welcomed the visitors to Thurrock, settled them in, and it was time for me to stand up and talk. We had prepared some tea and cake for the meeting, and, whilst leaning across the desk to pick up my papers, I contrived to let my tie fall into the cup of tea in front of me. Recollecting quickly that the Japanese have a sense of humour, I pointed to my wet tie, and they all laughed hugely. The ice had been broken."

Michael completed his presentation and then took the visitors a walk around the depot. The three Japanese company owners set out individually to look at whatever caught their eye. Fortunately, we have glacial boulders in the UK very similar to what exists in Japan, also in many respects of superior quality to what remains accessible there, so that was a good start.

Our Scottish beach cobbles and pebbles are also similar to the cobbles they used in Japan and they very much liked our Purbeck Limestone Rockery for walling material.

The visit was a huge success. CED Stone Group became the supplier for most of the decorative hard landscaping materials for Kyoto Garden with many of the materials selected on that visit.

We found some photographs Michael took of the garden build in our archives.

Stones play a huge role in Japanese culture and have done since ancient times. They are considered one of the most significant parts of a Japanese garden so it was a huge honour to be suppliers for the garden.

A tiny slice of Japan in London, Kyoto Gardens is regularly voted one of the city's most instagrammable spots and rightly so. Japanese gardens are an imitation of our natural landscapes, large stones are used in the gardens to symbolize mountains and hills.

In this design, for the most part, glacial boulders were used, but as fortune would have it, our geologist Patrick Parker happened upon some pink and black banded boulders with slight glacial wear, and these complemented the Harlequin quartzite used for the waterfall. You can find these placed throughout the garden.

Water is also a key element in Japanese Gardens, and at the heart of Kyoto Gardens is an impressive tiered waterfall. The water cascades over the large blocks of Harlequin Quartzite Rockery we supplied,..

...and ebbs into a tranquil pond brimming with brightly coloured koi carp.

At the centre of the pond is a small rocky outcrop representing an island, another popular component of Japanese gardens.

Bridges are another common feature in Japanese Gardens but, the granite bridge that crosses the pond at London Kyoto Gardens isn't quite as was designed.

"The bridge was not supposed to be as you see it now. Traditional beliefs are that evil spirits can only travel in straight lines. So to stop one from being followed, the bridge was designed without a straight route across. The central section (around 1m x 1m) of the main length was not supposed to be present, but 48 hours before the official opening, the garden failed its safety audit. The inspector required the gap filled and railings put around the bridge, both contrary in every way to Japanese design and beliefs.

I heard there was quite a dispute until they reached a compromise. No railings, but the gap had to go.

Most fortuitously, we had recently salvaged the cladding from the facade of the building at South Quay, Canary Wharf, damaged by a blast from the IRA bomb. It was quite close in colour to the remainder of the bridge, but much thinner, although this is not noticeable from the public's vantage point."

Although the pond is the salient feature of the garden, the rest does not disappoint. Designed in the style of chisen-kaiyu-shiki (a stroll garden), these gardens feature winding pathways constructed of inlaid cobbles,...

...and stepping stones made by sinking in flat-surfaced boulders.

Authentic Japanese Garden features are throughout the garden, from the traditional stone lanterns,...

...and water basins gifted by Japan.

To the stunning ornamental boulders sourced by CED Stone from the Scottish Highlands.

The gardens feature carefully selected and expertly placed plants reflecting the garden's oriental style. Walking through the gardens, whatever the season, you are treated to spectacular shows of colour. Be it from the Sakura trees' pretty pink cherry blossoms or the Japanese maple trees' vibrant crimson bursts in the autumn.

If you are looking for a restful retreat from the hustle and bustle of the city, this is it!

Thirty years on, and Kyoto Gardens is still just as spectacular.

This project encapsulates what we, as a company, are all about; Helping people to create beautiful landscapes, to form and shape the environment for future generations

Thank you to all the instagrammers who allowed us to feature their pictures.