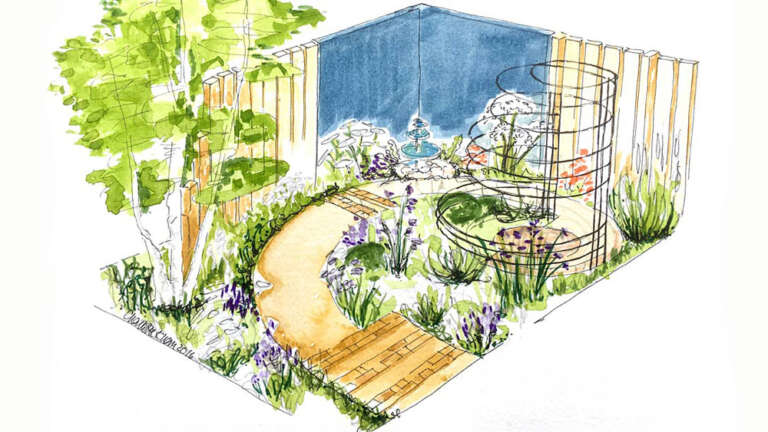 
Garden designers Rosalind Rosewarne and Charlotte Khan are collaborating as Archangelica Designs for their début show garden at this year’s RHS Tatton Park. Privately sponsored, their garden, ‘Inner Sanctum’, is inspired by famous mathematician and the number sequence named after him; Fibonacci.

Aimed to be a garden where one who is interested in mathematics and the natural world can get away from the hustle and bustle of daily life, the plot is just 6m x 4m and will incorporate the Fibonacci sequence in as many elements as possible.

Leonardo Bonacci, known as Fibonacci, was an Italian mathematician and considered by many as the most talented mathematician of the Middle Ages. Born in 1170, Fibonacci introduced the Western world to the Fibonacci sequence; a set of numbers that starts with either zero or a one, followed by a one, and proceeds based on the rule that each number is equal to the sum of the preceding two numbers – numerically, it looks like this: 1, 1, 2, 3, 5, 8, 13, 21, 34…….

The Fibonacci sequence, spiral and combinations thereof will be evident in elements within the back-to-back ‘Inner Sanctum’ garden, from the metal arbour to a water feature, from the curvature of the path to the line of the boundary and the planting proportions. Completing the garden are details also reflecting the sequence.

The boundary wall to the garden is made up of a series of scaffold boards painted in a rich grey, which at 4m, begin to curve with the path. They are positioned to reflect part of the sequence in pattern (3, 5 and 8) and will provide a contrasting back-drop to the planting.

Constructed using our Golden Amber Footpath Gravel and inlaid with our Cathedral Setts at key points to mark the inward movement of the path, the garden path follows the curve of the Fibonacci spiral, with the final bend of the curve leading to the metal arbour. The arbour suggests at the Fibonacci sequence by way of the number of ring spans, the position of the vertical spans between rings and the numbers within the groups of the vertical supports. It is here, within the specially crafted arbour, that a seating area for an individual can be found, where one can sit and contemplate whilst looking out into the garden.

The Fibonacci spiral is a series of connected quarter-circles drawn inside an array of squares that have Fibonacci numbers for dimensions. Because of the nature of the sequence, all squares fit perfectly together.

George Young of Big Dig Groundworks will be constructing the garden and although established since 2007, this is the first year that he has tackled a show garden build. The build will also comprise of a bespoke ceramic trickle fountain which our Scottish Beach Pebbles will feature under. The water feature will demonstrate the Fibonacci sequence by way of descending bowl dimensions, the number of water holes per bowl and the vertical spans between bowl levels.

Designer Rosalind graduated in 2010 from the Oxford College of Garden Design and met co-designer Charlotte whilst studying the RHS Horticultural course at Shuttleworth College. Charlotte, who studied a part-time City and Guilds garden design course prior to her RHS studies, comes from a background of interior design lecturing and has found many of the skills overlap within the two professions.

Drawing on their skills and experience from past and present, the team have chosen for their ‘Inner Sanctum’ garden a planting scheme which is predominately green, but also consists of soft cool blues, purples, whites and creams with accent plants in contrasting tones. Delicate feathery textures have been chosen to blend with the more structural forms, with some demonstrating the natural spiral often found in nature.

A lone ornamental tree, which will provide several seasons of interest, is situated in the opposite corner of the arbour and will provide height and structure, and will also allow for dappled light in the surrounding space.

Exploring the relationship between the Fibonacci numbers and nature, the ‘Inner Sanctum’ garden will be open to viewing at the RHS Flower Show Tatton Park, which runs from 20th – 24th July 2016.