Made by Children, For Children – The Believe in Tomorrow Garden at RHS Hampton Court 2019 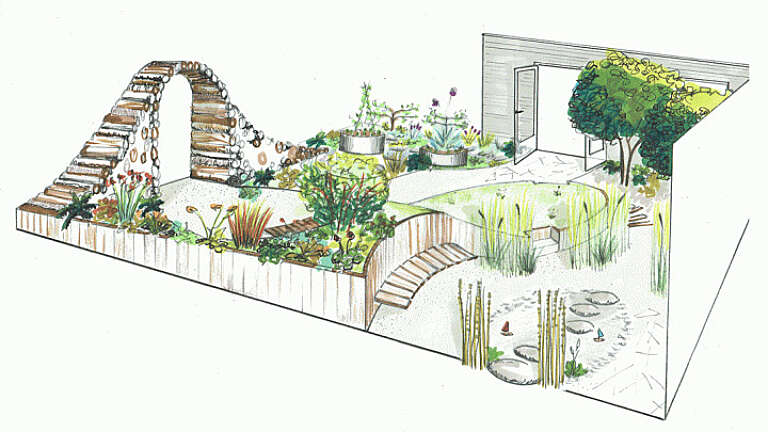 
CED Stone Group are proud to work alongside Seonaid Royall to build the Believe in Tomorrow Garden at RHS Hampton Court Flower Show this year. With the garden being entirely crowdfunded and large elements being built by children from various South London schools, we are delighted to be donating some of our products to such a fantastic project.

“Working with local communities to create an RHS show garden that helps reconnect children with nature, and will live on for years to come.” - Believe in Tomorrow Crowdfunding Page

A garden that is created by children, for children, will be at RHS Hampton Court Flower Show this year. Designed by Seonaid Royall, the Believe in Tomorrow garden will be ‘part oasis, part playground and part classroom’, with features throughout that children can interact with, such as edible planting beds, a fire pit, secret pathways and a pond. We at CED Stone are sponsoring the stone elements in a garden that will help tie the final project together at the show.


Seonaid has a fantastic garden design company called Sprout Up, of which dedicates itself to making the most of the outdoor spaces for urban families, primary schools and nurseries. Seonaid also runs a gardening club for Brixton school children, and has seen first-hand what the benefits of gardening and outdoor activities can do for children.


“As I’ve found, the more time they spend outdoors, the more confidence they have, and the higher their self-esteem.” – Seonaid Royall – RHS Hampton Believe in Tomorrow Video

With this in mind, Seonaid wanted to have a garden that would appear at RHS Hampton Court Flower Show this year that has been created by children, and is for children. Leading up to the show, Seonaid will be running gardening workshops in five different schools in South London, allowing them to grow the plants and build elements that will appear in the finished garden in July. This allows the students to get stuck in and learn about reconnecting with nature again, and they will be invited to the show in order to see the finished project that they helped create and interact with it further.


Once all of the elements have been created by the children, they will be transported to RHS Hampton Court, where Highgrove Landscaping will be building the official garden. CED Stone have donated quite a few products, including Gabbro Boulders that are going to be stepping stones in the pond, Indian Green Sandstone Crazy Paving for an element of the pathway, Scottish Beach Cobbles, Red CEDEC Footpath Gravel and Slabby Sandstone Paving. We are delighted to be sponsoring such a wonderful garden that has had such amazing input and educational benefits for the school children in South London.

All of the materials that the children are using in these workshops, the garden itself and all other elements are being paid for via a crowdfunding campaign, of which has nearly reached it’s goal. Seonaid has had some excellent support already from various companies but could always use more support for a great cause. You can find out more details about the campaign and contribute to the project here.


The garden will continue to live on after the show takes place, with the money from the crowdfunding assisting in the garden being split and taken to different communities and schools within London. The children in these communities will be given the tools and know-how on how to care for their segment of the garden and make it thrive. This is such a fantastic idea for children who live in more urban areas to be able to keep in touch with nature despite their surroundings.

If you are interested in visiting The RHS Hampton Court Flower Festival to see the Show gardens for yourself, visit their website here.